Lahore: Lebanese beauty Nathaly Farraj impressed by the Pakistani cricketer Ahmed Shahzad’s outstanding batting as she has praised Ahmed Shahzad on his Twitter account. Ahmed Shahzad has won many hearts by his exceptional batting in the last T20 World Cup, 2014. He has made his place by his performance and made his name and fame in the T20 as he has also been nominated for captaincy of T20 team of Pakistan.

Nathaly Farraj wrote on Ahmed Shahzad’s twitter account that “I like to see you batting and I am very impressed with your performance, Good Luck.” Ahmed Shahzad replied her “Thanx! I also like your work, good luck to you too”. Nathaly Farraj is a TV presenter and event host as she has won the title of Miss Globe Lebanon2012, Miss Asia Pacific World Star2012, Miss Earth Lebanon2011, Miss Intercontinental Lebanon2010 and Miss Facebook2010.

Ahmed Shahzad is a young Pakistani player, as he is right-handed opener batsman and also a part-time leg break bowler. He has made his debut for Pakistan on 24 April 2009 against Australia and has become the first Pakistani batsman to have scored centuries in all three formats. Ahmed Shehzad was born on 23 November 1991 in Lahore, Punjab, Pakistan.

It is pertinent to mention that Ahmed Shahzad has nominated for Pakistan’s T20 captaincy along with others including Shahid Afridi and Umar Gul. Ahmed Shahzad said in this regard that he feels honored on being related to the Twenty20 (T20) captaincy for the national team and it is privilege to represent his team and it feels like a dream come true to lead national team. 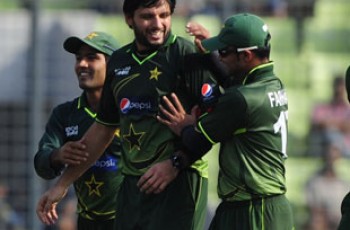 Bangladesh cricket team will try to take some positives from …