Stage dancer Nida Chaudhry was guest in Hum Log show of Samaa TV. The show was aired on Sunday at 10:03 PM. In the show Nida Chaudhry said: “Nargis and I do the same things on stage but i got banned and Nargis is never banned.” Nida said: “This is because Nargis gives away money, perfumes and other gifts to high authorities where as I cannot give these things to the high progile people.”

Nida Chaudhry said that my brothers are jobless and parents are ill. She said that she earn money through respect, everyone has to die and referred to Anjuman Shahzadi death that she also died and only took away respect with her.

Ali Mumtaz asked that why your dances are vulgar like Saima Khan, in reply Nida Chaudhry said that now government has taken strict actions and now there is no vulgarism in the stage dance. 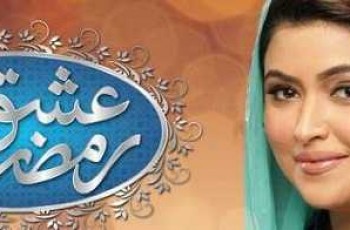 TV One has arranged its Ramazan transmission for its viewers …