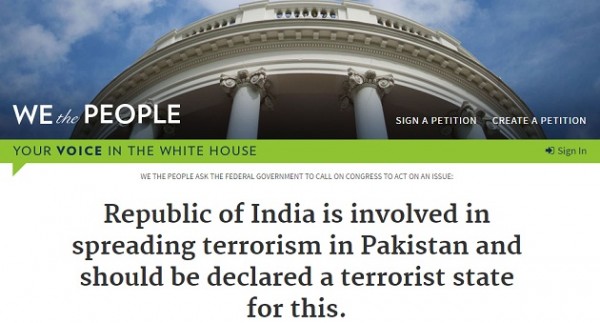 The White house has closed an Indian sponsored Anti-Pakistan Petition saying that the “Petition has been archived because it did not meet the signature requirements. It can no longer be signed.”

The petition was started on 21st September and required 100,000 signatures at least, but it received 665,769 signatures. When questions were asked by media about closing the petition the White House officials said that there were “technical issues with some of the signatures”.

In July a petition “August 15th is NOT Independence Day For Sikhs. SUPPORT the Liberation of Indian Occupied Punjab to Create “KHALISTAN” was successfully launched and filed  and reached the minimum 100,000 signatures that are required for an official response from White House.

Another Petition was also launched to declare India as Terrorist state because it is supporting terrorists in Balochistan, Federally Administrated Tribal Area and Karachi.

Rawalpindi: Pakistan with a population of around 179.2 million has 50 …

Supreme Court (SC) has termed arguments of federal minister as …