Water and Power Development Authority (WAPDA) has announced new jobs and career opportunities. Jobs are announced for various offices of WAPDA located in different parts of the country, including its head office based in Lahore. WAPDA has announced multiple job opportunities for its different departments including Finance, Engineering, Administration, Water Wing and Power Wing. WAPDA is looking for experienced and hardworking candidates to apply for several executive and managerial positions.

Fresh graduates can also apply for some beginner level positions in the authority. Only selected candidates will be called for an interview and they would be offered market competitive salaries and other attractive benefits, if selected for particular job. All the selections would be made totally on merit basis and candidates using illegal means would not be entertained according to the policy of WAPDA.

Water and Power Authority (WAPDA) was established in 1958, through an Act of Parliament. It is a government owned power and water maintaining authority and includes Tarbela and Mangla as its resources. Headquarter of WAPDA is based in capital city of Punjab, Lahore while its other offices are located all around the country.

Interested candidates can see the details of current jobs and career opportunities in WAPDA, on its Official Website 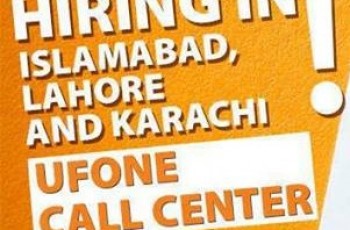 Ufone is offering job opportunities at its call centre in …

There are new job openings at the Shaheed Benazir Bhutto …