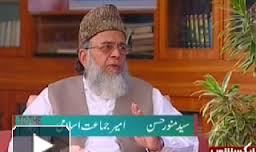 Lahore: This was undoubtedly one of the most whacking interviews the viewers had ever seen on Pakistani TV Screens. Shahzeb Khanzada bashing out Ameer Jamaat-e-Islami (JI) Syed Munawar Hassan in one on one interview aired last night at Express News. The anchor of show ‘To The Point’ Shahzeb Khanzada comes up with too many cunning questions for which JI Chief had no clue or answer.

The very first question Shahzeb asked from Munawwar Hassan was about Taliban and right after this question JI leader started to feel uneasy though he tried to give a comprehensive reply to the crafty question.

Right from the beginning, it began look like they are not having an interview but a clash between two leaders of opposing political parties. Munawwar Hassan looked a bit intolerant while Shahzeb Khanzada looked as bombarding JI’s stances in the past and present.

JI Ameer behaved irresponsibly, giving the impression of immature activist of an intolerant political group; on the other hand, Shahzeb should have sensed the seriousness of the matter and changed the tune to trouble-free mood.

After 24 minutes of exotic interview, anger got the better of Hassan deciding to leave the show in the middle. Shahzeb tried to cool him down but all went in vain and Ameer Jamaat-e-Islami left the show. 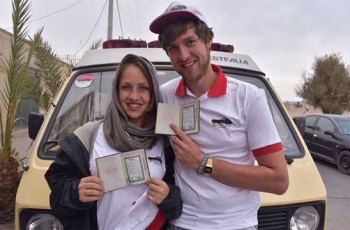 Christian Nieth and Elisabeth Hartmann, a German couple sold their …