Rehman Malik is absolutely right and this statement is very responsible one and based upon true facts. Pakistan is facing this extremism in almost all parts of the county. These are paid people from foreign agencies they offered Ghaibana Namaz e Janaza of a lot of terrorist like Mangal Bagh in Raiwind. If you ask any of their scholars to declare khud Kash attack as HARAAM they won t.  Its misconception that they don t have gun men at Raiwind ijtima because they don t need to coz they are themselves attacking pure Sunni people in Mosques and otherwise. Pakistan army has made special plays on PTV about all these activities and religious group behind it. Most of you might not know that these people have supported Shah Fahad in Karachi they organized protests in favor of him because Saudi menarche has funded they so called Muslims.

These people are really doing these activities in parallel lots of innocent people with positive intensions join them in innocence. I used to be part of them too but if you see their history and their pioneer scholars’ literature is totally against Muhammad PBUH personality which is the base for Islam and our faith. Every Muslim should look into their scholars’ literature and their true intensions rather than this Tablighi face which seems so positive and innocent but actually they are getting your faith in wrong direction. I would suggest all Muslim brothers to study their history and literature before joining them. Their history is not older than 150 years or so in British Era and this was initiated in India from Dar al Aloom Deoband. You can watch all their deviations on internet too everything is available on YouTube from Sunni Scholars. Why they need a separate sect 150 years ago it was seeded by British and these so called Tablighis are driving their agenda. 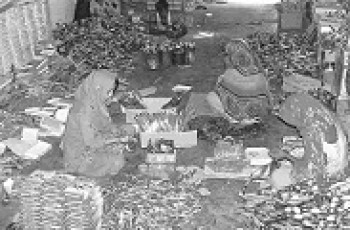 In the above photograph workers are packing Heena (Mehndi) in …

Some one might have kidnapped him for ransom money but atleast …