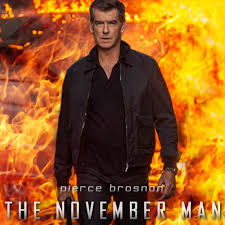 Pierce Brosnan returns to the big screen with the latest Hollywood film The November Man. It is a thriller based on the mysterious world of spies and intelligence agencies. The November Man is directed by Roger Donaldson who is known for his movies The Bank Job, Species and The Recruit.

The November Man stars Pierce Brosnan who is famous for playing the role of James Bond and is one of the most charismatic actors in the industry. He is also the co producer of the film alongside Beau St.Clair and Sriram Das. The other actors in the movie include Luke Bracey and Olga Kurylenko.

The November Man is based on the novel by Bill Granger titled There Are No Spies. It focuses on the story of  a retired CIA agent Peter Devereaux(Pierce Brosnan) who is forced to leave his retirement and take on one last job to protect a valuable witness against a powerful Russian politician. However his work leads him to uncover hidden truths which put him on the target list of his own former employers, the CIA.

The movie received mixed reviews on its release and was criticized for not being original enough though the performance of Pierce Brosnan was worth watching. The November Man has been released across cinemas in Pakistan including Cinepax, Cineplex and Nueplex.

Bakhaber Savera Ammaon Ki Adalat has started on On ARY …

Talent or Public relations – Which play better role in …