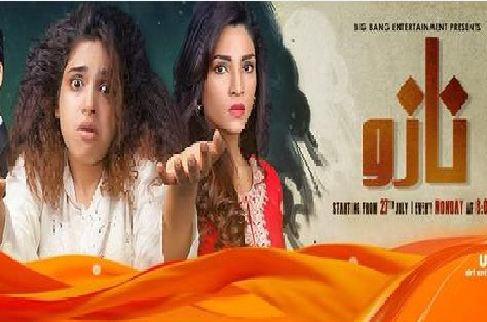 Popular entertainment channel of Pakistan Urdu 1 has started new drama serial Nazo. The newly started drama on the Urdu 1 screen is consisting of popular actresses of Pakistani showbiz industry including Atiqa Odho and Zhalay Sarhadi. However, leading role of Nazo is played by a young and talented actress of Pakistani television industry, Sonya Wasif. With a very touchy story, drama serial Nazo is a message for the whole society more than an entertainment. Through this drama, the producers have raised very important issue of our society.

The story of Nazo is revolving around a mentally challenged girl who is facing difficulties in her life and no one gives the time that she needs. Before the birth of Nazo, her parents fight with each other on the issue of gender of their upcoming child.

The father of Nazo doesn’t want another daughter, as the couple already had a daughter but after the birth of Nazo, her father leaved home in angry mode and killed in an accident. The mother (Atiqa Odho) of Nazo started doing job to fulfill the expenses of home and she does not have enough time for her daughter.

Drama serial Nazo has already started from 27th July on Urdu 1 and will be broadcasted on every Monday.

Organizer of “Mahi Arts and cultural organization” Maha Zafar has …

Advance Telecom has gone harsh against fake mobile companies and …