In different series of videos posted on social media platform Twitter with the hashtag #KEAligarhKoBijliDO, KElectric is reiterated as exploiting Aligarh Society Residents by Load-shedding.

The residents are complaining about their poor service and quality of disrupted electricity supply in the society.

Aligarh Society Residents posts videos highlighting the story of being victimized by KElectric within their own society residents after paying the bills timely. Whilst society management paid 650 million for transmission lines, feeders and other works.

KE officials are unable to give us a proper answer, their different versions and responses have been recorded. But we have been able to find out that the power supply is not affected due to any legit reason but rather due to reduced generation from furnace oil.

Aligarh Society members has been complaining about KE officials in IBC Gadap and their inability to resolve the issues and provide us with a solution.

The members have protested multiple times with the last year in 2020, with a vision to make the society better by improving its electric supplies and amenities. However, they have not been able to achieve any positive results due to poor service provided by KE and the ongoing load shedding of 10 hours.

The society residents are protesting for Load-shedding and it’s impact on the lives of families.

The society members are protesting for load shedding and it’s impact on the lives of families. The society residents want that government officials take the due notice against KElectric. “KE officials are unable to give us a proper answer” says Aligarh Society members and residents.

KE officials are unable to give us a proper answer” says Aligarh Society members and residents.

Residents of Aligarh Society have been facing a lot of problems due to load shedding. “KE officials are unable to give us a proper answer,” says Aligarh Society members and owners collectively in different video recordings.

Residents demand government to take notice against KElectric incompetence to the deliverables for the society.

“You are not allowed to disconnect power. We have paid our bills on time and we want to know why you have disconnected us from the electricity supply. If people like us can pay their dues regularly, then why should they get disconnected?”

“We demand that you immediately resolve this issue in our society and stop overbilling Aligarh residents and exploiting them any further in the coming months.” said different residents in the compaign.

The residents emphasized “KElectric should do better. KElectric is a private company, and it’s in the business of making money. But what about our lives? What about our safety which is compromised due to Load-shedding when there is black out? We want to be able to use electricity without being harmed by the utility company’s unjust policies.”

KElectric has been asked to provide a service that benefits everyone — not just those who lives in DHA or any prime location but also those owners, renters, students and other people who live in Aligarh society with electricity connections. The problem is that they don’t seem interested in doing so; instead they are treating them like 2nd class citizens while they suffer under their sickening load shedding schemes which leave them without access to power for more than 10 hours in a day during peak demand hours when we need it most (and this happens every single day).

Aligarh Society residents are protesting for load shedding and its impact on the lives of families in Aligarh Society. They feel that their lives have been made difficult due to KElectric’s poor service and quality of work due to which breakdown frequently occurs for which the society paid 650 million. They want government officials to take notice and force KElectric management to investigate the issue, provide us in written the problem so that we can resolve. But KE officials are unable to give them a proper answer as per their demand. 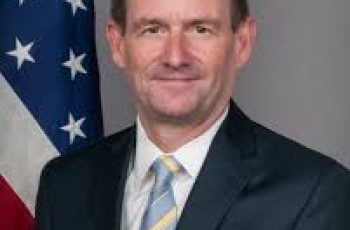 The veteran diplomat, David Hale has been nominated as the …