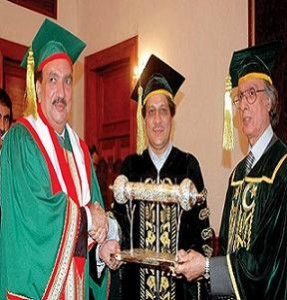 Karachi: The Teacher’s Association of Karachi University has condemned the Honorary PhD degree which was given to Federal Interior Minister Rehman Malik. The Associations has announced boycott of classes on October 26.

The association has also demanded drawn back of degree from interior minister. The Association also declared that University’s name shouldn’t be used for any political purpose and Chancellor and Vice Chancellor did a political step in this regard.

Karachi: Government, private schools and all other educational institutions in …

Lahore: Dr. Ahsan Akhtar Naz was removed by the Vice …