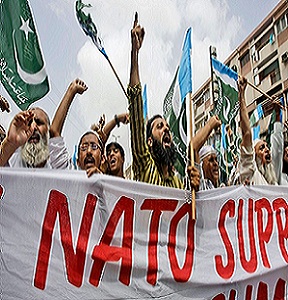 Karachi: Jamaat-e Islami Karachi has completed preparation for the protest rally in condemnation to government’s decision of restoring Communications lines for the NATO through Pakistan. The rally would be produced at 3 pm from Bolton Market till Keamari. The participants of the rally would walk throughout the route of the rally. Meanwhile, a meeting was held to review the preparations headed by Jamaat-e Islami Karachi Ameer Muhammad Hussain Mahenti. The meeting after reviewing the arrangements approved measures unavoidable for the production of the protest rally. Jamaat-e Islami Karachi General Secretary Naseem Siddiqui, Deputy Ameers including Syed Muhammad Iqbal, Nasarullah Khan Shaji, Dr Abdul Wasay Shakir, Deputy Secretary Ali Muhammad, Information Secretary Zahid Askari, and Jamaat-e Islami Public Relations Director Sarfaraz Ahmed were present.

The meeting had decided to set up awareness camps on more than 25 venues in the city especially on the route of the rally. A delegation of Jamaat-e Islami led by Mahenti also visited camps situated at Numaish Chowrangi and other areas.

Speaking on the occasion, Mahenti said that owing to facilitating the NATO, Pakistan had suffered a loss amounting to Rs90 billion dollars. The Parliament had imposed conditions for the restoration of NATO supply lines that the United States should stop attacking Pakistani soil with drones and offer an unconditional apology but the government had restored supply lines abruptly and had ignored those conditions.

Karachi: Different events of friring in karachi took away six …