6 Kirdar Aik Musannif Ki Talash Mein is a theatre play by National Academy of Theatre Arts (NAPA). As the name indicates, the story of the play revolves around six characters that are caught up in miseries of their lives. They look up to a writer who can provide complete story to their live happenings. This play is an adaptation of Luigi Pirandello’s ‘Six Characters in Search of an Author” and stars iconic thespian Rahat Kazmi. Fawad Khan, the writer has narrated the account in Urdu language. The roles are played by Rahat Kazmi,  Mehr Jafri, Maisam Naqvi, Hammad Sartaj and Mazeen Malik.

The veteran, experienced Rahat Kazmi heads the play. The characters bear the harsh experiences of their lives. They had no place to shed their bitter realities of life. Their stories have no proper flow; hence, they end up performing play at the theatre.

The play depicts the women as a suppressed class, but the problems she has been inflicted with, makes her character important to rise out as a powerful voice. The theatre might seem to make no sense in the beginning, the middle part of the story is also dragging, but the climax is powerful enough to win over appreciation of the viewers.

The play is a reality depicted. Everyone in his or her life tries to adjust with the life issues. We look forward to someone who can narrate our account. Not being contended with what we have presently, we look forward to a bright future.

National Academy of the Performing Arts Repertory Theatre (NRT) is a platform to promote work of the NAPA graduates.  Quality theatre is performed by the NAPA students without any constraints from the commercial sectors, thus, ingraining in them better theatre performing skills.

The National Academy of Performing Arts is located in Karachi. NAPA was established in 2005 as an institution to conserve and teach performing arts and music to students in Pakistan.

[junkie-alert style=”white”]At NAPA the theatre is being performed from 23rd of January 2014 from Thursday to Sunday and will continue till 9th of February 2014, 8 pm[/junkie-alert] 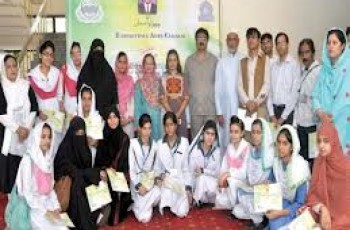 Brand Pakistan Conference will be held on the 28th and …